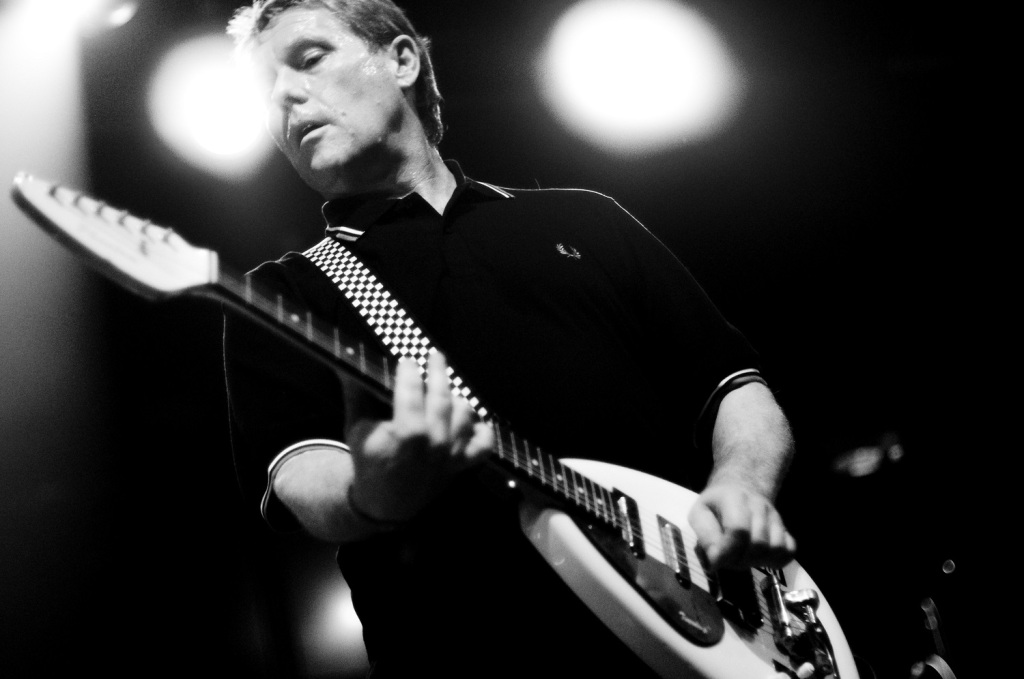 At their peak, The Beat were one of the biggest bands around. With five Top 10 singles to their name, their first two albums ‘Just Can’t Stop It’ and ‘Whap’pen’ both bounded to #3 in the charts and their rise continue to the point where they could fill arenas across America. They were, as vocalist, guitarist and songwriter Dave Wakeling recalls, “An incongruous set of people from all different cultures and upbringings.” When the Birmingham sextet first hit the charts in 1979, joint-frontman Ranking Roger was just sixteen-years-old while saxophonist Saxa, who had played with the likes of Desmond Dekker and Prince Buster, was pushing fifty.

Straddling 2 Tone and post-punk, The Beat’s secret ingredient was Wakeling’s uncanny ear for a pop hook which gave their already distinctive sound an immediacy which set them apart from the era’s other newcomers. And in keeping with the times (a multi-cultural band touring as the National Front were on the rise, their home city an obvious target if nuclear tensions overflowed into Armageddon), his lyrics possessed a highly literate ability to explore political and personal issues with a barbed wit.

“When we started everything we did by accident just went right,” says Wakeling almost forty years later. “Even when it seemed like a tragedy it worked out great.” He illustrates that point by referring to a show at which they opened for the late great John Peel at Aston University. After playing their set, Peel described them as “The best band in the world apart from The Undertones” and the band invited their new friend out for a curry to thank him for his support.

“We were sitting there with John just so full of ourselves and a car came around the corner and smashed into our blue van,” continues Wakeling. “That put a dampener on things, but he said, ‘I’d better give you a Peel Session to pay for that.’” And that recording, in turn, was passed onto Simon Potts who signed them to Arista Records.

Eventually, however, that magic ran out of steam. Each member of the band had different needs and desires, and they could barely organise themselves sufficiently in order to even complete a rehearsal. The Beat were over.

In their wake, Wakeling and Roger formed the supergroup General Public (initially featuring The Clash’s Mick Jones, Horace Panter from The Specials, and Micky Billingham and Stoker Growcott from Dexys). Their 1984 debut ‘All The Rage’ hit the upper reaches of the American charts and featured three hit singles including the 80s classic ‘Tenderness’. In 1994, they had their biggest ever hit with a cover of The Staple Singers’ ‘l’ll Take You There’, which was used by both Bill Clinton and Barack Obama in their successful presidential election campaigns.

After some time away from music (albeit still working on music-related projects for Greenpeace and legendary film director John Hughes), Wakeling was coaxed back into performing by Elvis Costello. Suddenly The Beat had two chapters: The Beat featuring Ranking Roger, and The English Beat starring Dave Wakeling, the latter of whom have played an estimated 1000 shows, mostly in North America.

Wakeling started adding a few new songs to The English Beat’s live sets but soon discovered that the merch desk would be deluged with fans wanting to buy those new tracks on CD. “That started the ball rolling. I wouldn’t have wanted to have done a vanity record – I would’ve been just as happy to keep the songs in my head rather than go to the bother of making a record if no-one was interesting.” But people really were interested, as evidenced by the album’s initial PledgeMusic campaign which raced towards 174% of its target in no time at all.

“When we started everything we did by accident just went right. Even when it seemed like a tragedy it worked out great.”

Work on the album, tentatively titled ‘Here We Go Love’, progressed in piecemeal fashion between bouts of touring over the past two years, with Wakeling backed by his regular seven-piece band. At first they felt overly conscious of the band’s heritage. How much should it sound like The Beat? And what would The Beat sound like even if it was the same people all those years later?

Recorded at NRG in Los Angeles, the album’s sonic approach utilises the best of the past and the future. Mixing veteran Jay Baumgardner and producer Kyle Hoffmann blended their expertise to create a sound with the warm, organic instrumentation that’s allowed The Beat’s finest moments to remain fresh all these years later. Yet they’ve also embraced the precision and convenience of contemporary digital recording.

That open-minded approach extended to Wakeling building a vocal booth in his home – rather than wasting time travelling into the city, he could record vocals as the mood took him. Sometimes that might be four solid hours of work, but on others a quick swim or a spot of gardening might reinvigorate his mojo.

Eventually questions of how the album should relate to the band’s lineage resolved themselves entirely organically. As a Brummie musician whose love for Kingston’s island sounds is equally as informed by the scorching sun and heated politics of his Californian home, the likes of ‘Be There For You’, ‘Redemption Time’ and ‘You Oughtta Know’ are exactly representative. Naturally there’s even a distinctly Santa Monica brand of ska with ‘Dem Call It Ska’.

It’s far from one dimensional, however. A Stax strut with Wakeling channelling his Vegas crooner fantasies and gospel backing vocals, ‘Every Time You Told Me’ is arguably the album’s most immediate moment, although ‘The One and The Only’ and ‘If Killing Worked’ both run it close with a breezy rush of new wave power-pop and an undercurrent of ska. Arguably the leader of the pack is the exuberant power-pop of ‘Here We Go Love’, which Wakeling wrote in an attempt to “have something that sounded like The Briefs covering a Buzzcocks cover of a Monkees song.”

While the music rolls on a tight groove from the live band, a handful of special guests make a significant contribution too – notably Roddy ‘Radiation’ Byers of The Specials and The Skabilly Rebels, Train guitarist Luis Maldonado and backing vocalists Kevin Williams and Jelani Jones. Wakeling even sought input from The Beat’s late saxophonist Saxa. Although encumbered by a tendon injury which meant he couldn’t play, he hummed some saxophone melodies which Wakeling incorporated into the album to maintain a taste of his musical flavour.

Thematically, it still simmers with Wakeling trademark wit and wisdom. ‘Every Time I Told You’ and ‘Redemption Time’ address how your opinions evolve throughout life. “I’m in the second half of the match, as it were we. The first half of your life is filled with absolute sincerity and meaning it to the point it hurts, and in the second you seem to become more observant and interested in how you form your opinions.”

Elsewhere, however, his perspectives are more constant. ‘You’re Stuck’ returns to the songwriter’s ongoing fascination with solipsism which he previously addressed in ‘Mirror In The Bathroom’ and ‘Best Friend’, while ‘Drive Her Away’ draws playful parallels between the excitement of finding a new girlfriend and buying a new car.

An ever philosophical character, Wakeling’s thoughts on mortality, impermanence and what it means to be alive are very much represented at the core of the album. Possessing an emotive string arrangement that was created with Drew Erickson, the mournful ‘Never Die’ is already proving to be a tear-jerking highlight of his live shows. Nonetheless, the country-tinged sorrow is elevated with a spark of solace and some nuanced timpani and trumpet.

“There’s something very warm about loss and shock, and there’s a clarity that comes with as well,” he reflects. “All of a sudden everything that’s important comes into focus and everything you waste your time fighting over suddenly seems meaningless. It’s also about retrying to fight against impermanence.” The song’s final line presents a minor pragmatic twist. “I’m not really a deist and I don’t see any evidence of a heaven. It’s all about accepting that things come to an end, but at the end it preys that it doesn’t.”

That theme is further explored with ‘The Love You Give’, an uplifting rock ‘n’ roller with a pedal steel guitar that evokes a road trip on a dusky Californian highway. It was inspired by the death of Wakeling’ mother, a “stoic, intellectual Catholic” who became a “Wiccan, Earth mother type” in her later years.

“We sat there drinking wine and my sister said, ‘There’s something here, isn’t there?’ We carried on and came to the idea that it was the love that we’d shared with my mum. By the next bottle of wine we deduced that’s what immortality really was – nobody lives forever, but the love you give lasts even when you’re gone.”

The spectre of Trump of course looms large with the deeper meaning within ‘How Can You Stand There?’ questioning people’s indifference to the erosion of human rights, while ‘The One And Only’ examines “the Donald Trump in all of us. Like it or not, the vast majority of white men in America voted for him.” Wakeling’s belief is that co-operation rather than division is the only way to progress: “We can make America great again, but we can’t make it 1960 again.”

More universal is ‘If Killing Worked’, a direct anti-conflict lyric Wakeling could’ve written when The Beat first formed. “Growing up I’d see the wars on television in black-and-white and I was utterly convinced that they’d have sorted this nonsense out by the time I was a grown-up. But now you can watch it from every continent in colour and slow motion. It’s embarrassing. If killing people’s children hasn’t worked for the past 30,000 years, why would we still be thinking that it’ll make anything right now?”

The release of ‘Here We Go Love’ will represent a culmination of a lengthy journey for Wakeling, a man who has been described as “a singer-songwriter as savagely witty as Elvis Costello” (Rolling Stones) and who “ought to be spoken of in the same breathe as Weller and Strummer in the post-punk pantheon of heroes” (The Quietus). Honouring The Beat’s roots without being beholden to the past, Dave Wakeling’s reappraisal starts here.